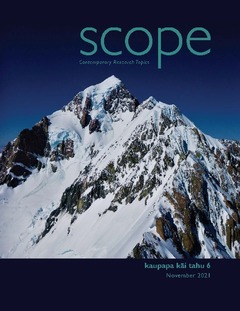 Māuranga Māori [Māori knowledge] Before the arrival of the European settlers, Māori society was governed by a system of principles, laws, and customs known as tikanga Māori. The terminology, tikanga, is derived from the word tika that means to be righteous, honest, and just. At the heart of mātauranga Māori is tikanga and both principles conceptualise whakawhanaungatanga (making good kin relationships) and whakapapa (shared ancestry). Through whanaungatanga (kin relations), a Māori world, both visible and invisible, is conceptualised and apprehended as palpable. Conceptually, whakapapa can be understood as the interminable connections from the Atua (Māori gods) to earth to the people. Whakapapa binds Māori people together in a sacred relationship and responsibility to care for each other, the soil, air, and water. Prior to colonisation, mātauranga Māori that included the principles of tika, tikanga Māori, whakawhanaungatanga, whanaungatanga, and whakapapa enabled Māori to live a tika (good, just, decent) life. Since the beginning of colonisation of Aotearoa New Zealand, by the British, kāinga have been damaged by the scientific, calculative, logical discourse. Through the dominant English language and culture, the Māori people have been pressured to obey linguistic conventions which are distinctly Western. In the Whenua Whāma project, the research team has begun to talk deeply of a cultural interface that draws attention to Māori beliefs, interaction, and self-development in the areas of organic and regenerative agriculture across Te Tai Tokerau, Aotearoa.