Age related changes of the pinealocytes of the rat pineal gland and the possible protective role of vinpocetine: Ultrastructure study and clinical significance 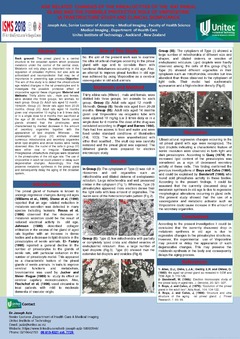 BACKGROUND: The pineal gland is a central structure in the circadian system which produces melatonin under the control of the central clock. Melatonin not only plays an important role in the regulation of circadian rhythms, but also acts as antioxidant and neuroprotector that may be of importance in preventing age process. OBJECTIVE: The aim of this study is to detect the ultrastructural age related changes in the rat pinealocytes and to investigate the possible protective effect of vinpocetine against these changes. MATERIAL AND METHODS: Thirty albino rats , male and female, were divided into three groups, ten animals for each group. Group (I): Adult rats aged 12 month - 16month. Group (II): Senile rats aged from 20-28 months. Group (III): Adult rats aged 16 months given oral vinpocetine 10 mg/kg b.w 3 times daily or in a single dose for 6 months then sacrificed at the age of 26 months. RESULTS: Senile pineal glands showed that the pinelocytes were characterised by marked decrease in the amount of secretory organelles together with the appearance of lipid droplets. Whereas , the pinealocytes of group (III) animals showed numerous mitochondria and secretory organelles while lipid droplets and dense bodies were hardly observed. Also, the nuclei of the cells in group (III) were either oval or irregular. CONCLUSION: Proegressive ultrastucture changes were observed in the pinealocytes of the old age rats. The use of vinpocetine in adult rat could prevent or delay such degenerative changes. Accordingly, this may preserve melatonin synthesis in the pineal gland and consequently delay the aging of the circadian system..