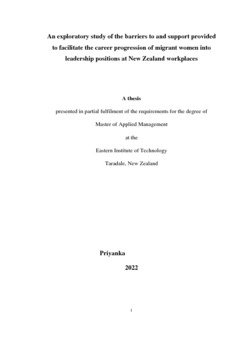 Priyanka. (2022). An exploratory study of the barriers to and support provided to facilitate the career progression of migrant women into leadership positions at New Zealand workplaces. (Unpublished document submitted in partial fulfilment of the requirements for the degree of Master in Applied Management). Eastern Institute of Technology (EIT), New Zealand. https://hdl.handle.net/10652/5784

This paper examines migrant women’s career progression experiences into leadership roles in New Zealand. Hitherto, there is limited literature on understanding the challenges and barriers facing this group. To better understand why migrant women, hold few managerial/ leadership positions in New Zealand, it is important to explore how gender, ethnicity, and immigrant background intersect and influence career progression. The research also investigates the support migrant women perceive as useful in assisting them in their career progression. In this study, intersectionality theory was used as a framework to examine the barriers migrant women from the Indian subcontinent face and the support they receive in attaining leadership positions in New Zealand. Primary data was collected using qualitative semi-structured interviews. In this study, a total of 10 migrant women from the Indian subcontinent, who currently hold managerial or leadership positions in New Zealand, were interviewed for 45 minutes to one hour. QSR NVivo software was used to analyse and code the collected data, and themes were developed to understand participants' experiences. The findings show that most migrant women perceived disadvantage in terms of ethnic stereotyping. Moreover, migrant women's previous experience in their own country also played a role in determining the barriers in New Zealand. Most of the women participants originated from countries where gender plays a vital role in career progression, whereas in New Zealand, they did not experience the same level of male domination. As a result, most of them did not feel gender was the main barrier to their career advancement, instead pointing to ethnicity and immigrant background as key factors. Strategies recommended by the migrant women from the Indian subcontinent included learning how to advocate for oneself as well as establishing relationships with mentors. The findings show that migrant women have received some support from their organisations. This study's findings will benefit policymakers to introduce new strategies to address these barriers. Furthermore, the research will contribute to literature as limited research is available on migrant women's career progression in New Zealand.