Practice to pitch: The relationship between force-velocity profiles and match-day performance of semi-professional rugby union players 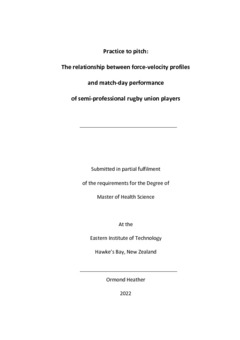 Heather, O. (2022). Practice to pitch: The relationship between force-velocity profiles and match-day performance of semi-professional rugby union players. (Unpublished document submitted in partial fulfilment of the requirements for the degree of Master of Health Science). Eastern Institute of Technology (EIT), New Zealand. https://hdl.handle.net/10652/5775

INTRODUCTION: Previous research has investigated team match statistics to determine the most prominent in successful rugby teams, termed rugby performance indicators (RPIs). Coaches believe emphasising specific RPIs may increase team success. Recent advancements in force-velocity profiling (FVP) have allowed coaches to better assess the neuromuscular performance of athletes. However, while profiling metrics have been explored in biomechanically simple activities such as sprinting and jumping, little is known about the value of FVP in informing training for sport-specific tasks in rugby. In addition, most exercises used in resistance training (practice) occur in the vertical plane of motion, whilst the majority of performance indicators used on match-day (pitch) require players to exert force in a horizontal direction. This study investigates the relationships between force-velocity profiles (FVPs) obtained from four common resistance exercises and match-day RPIs. Investigating these relationships may provide coaches with the tools to enhance performance in practice and translate it to the pitch. AIM: This study aimed to determine the relationship between athlete neuromuscular performance derived from FVPs, and RPIs. PARTICIPANTS: This study recruited 22 semi-professional male rugby players (weight 102.5 ± 12.6kg, height 185 ± 7.4cm, age 24.4 ± 3.4years). Playing positions were distributed as backs (n=10) and forwards (n=12). METHODS: Athletes performed four exercises (sled push, sled pull, back squat and jammer push-press) at incremental loads to establish FVPs. Rugby performance indicators (post-contact metres, tries, turnovers conceded, tackles, try assists, metres run, tackle-breaks and defenders beaten) were collected over nine weeks of a competitive season. Statistical analysis: Correlational analysis was used to determine the relationship between the results of FVP and RPIs. Results: There was a statistically significant, moderate, positive correlation between tackle-breaks and sled push V0 (r=.35, p=.048). Significant, large, positive correlations between tackles and jammer push-press V0 (r=.53, p=.049), tackle-breaks and sled pull F0 (r=.53, p=.02) and tackle-breaks and sled pull Sfv (r=.53, p=.02). There was a significant, negative relationship between sled pull V0 and tackle-breaks (r=-.49, p=.04). The largest, significant correlation reported was between metres run and sled pull F0 (r=.66, p=.03). CONCLUSION: Results suggest horizontal resistance training may be best to enhance RPIs (tackle-breaks, tackles and metre run) and that maximal power is not indicative of successful match performance. Instead, a specified balance between force and velocity is best, depending on the positional demands and the rugby performance indicator of interest. Therefore, coaches should conduct FVP to identify deficits and prescribe individualised training to create optimal profiles, either force or velocity dominant.