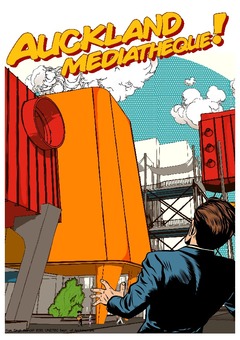 ARCHITECTURAL QUESTION How can architecture generate social and permeable environments through a typology such as a mediatheque? ABSTRACT Auckland, New Zealand, a bustling and fast-growing modern city that is as beautiful as it is diverse. Many cultures and people land on the city’s waterfront creating an active, vibrant scene. This, includes the likes of local pedestrians travelling to work or school or the many tourists who enter and start their exploration of New Zealand through this urban gateway. Even though there is a large and growing pedestrian presence on the waterfront of Auckland, the streetscape and public realm ultimately still belong to the automobile. Realising the negative effects this has on the public social realm, emergent projects within Auckland’s near future aim to return the cityscape to the pedestrian user, thus creating a stronger social and traversable city. This project investigates the local context of Auckland’s waterfront and places the concept of a social hub along Auckland’s Quay Street. This will be designed alongside the emerging projects of Auckland’s waterfront to ultimately deliver a building that not only adds to Auckland’s cityscape but increases the interactivity of the public and act as a gateway to the city. The designed social hub will be created to the typology of a mediatheque, a building which provides gallery, event, library and public space for the local context. This idea prompted a look into many architectural theories and styles such as Rem Koolhaas’s lobotomy, Bernard Tschumi’s disjunction, and a strong precedential understanding of Parc de la Villete as well as Centre Pompidou. With these in mind, the Auckland mediatheque aims to promote a playful, timeless, iconic and socially enhancing structure that will benefit the pedestrian fabric of Auckland, New Zealand for many years to come. SITE: 148 Quay Street, Auckland, New Zealand.