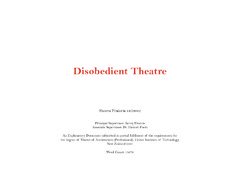 RESEARCH QUESTION How can architecture support and embody activism? ABSTRACT When issues or conflicts arise within our society, change is pursued. The right is given to every person in this world today to become politically engaged. Society witness a power shift, and activists demand their thoughts to be heard. However, a singular person cannot understand or be engaged in every matter. It is often overwhelming to hear and see an abundance of issues equally relevant and worth fighting to change. What should we care about? The action of communicating with people in a physical setting holds immense value, mainly when communicating for change. When change is sought out, the equilibrium of our public space is disturbed. Protests such as marches and rallies, and demonstrations are often actioned. The artistic field has a significant role in protests and social movements. A variety of dynamic mediums such as street art and visual art come together to address ideas of culture and politics. The intertwining of the act of protests and art transforms the conventional public space – a disobedient theatre. The project aims to design an intervention of activism. First, the intention is to present a setting supported with a creative intervention where discourse is encouraged. This is described as physical activism, a “performance,” where the project acts as a “theatre” for disobedience. Activists will occupy this space and perform during events such as protests and marches. The project will also provide facilities for artists, such as social and political artists who contribute to these performances. Secondly, the project aims to produce a piece of architecture that performs with its own activist voice. The architecture itself is an actor in the space and works in a disobedient manner disturbing normative urban organisation. The project require methods that will support its disobedeint aims. Collage is a disruptive form of representation and will produce a disruptive outcome from its root. Model making will materialise two-dimensional collages into occupiable space, which eventually led to a final design outcome. The project challenges the association of protest and architecture in the urban fabric through research across multiple theoretical fields, including sociology, political science, urban and architectural theory. This project uncovers relevant philosophies within public space, the sociopolitical realm and activism. The relevant figures addressed include Jürgen Habermas’, Tali Hutaka, Lebbeus Woods and Haus-Rucker-Co. Habermas’ expresses the importance of communication in the public sphere to lead our society towards a democratic future. Tali Hutaka provides vital insight into protests by breaking down spatial choreographies. Her work provides a crucial link between architecture and activism in the field of research. The work of Lebbeus Woods and Haus-Rucker-Co present radical imagery that challenges a normative perspective on architecture. Their work provides an example of spatial activism to assist the project in materialising its message. SITE: Queen Street, Auckland, New Zealand