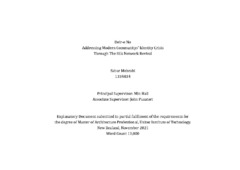 This research addresses the issue of placelessness, a global phenomenon caused by the rise of urbanisation and the demise of rural communities. It investigates connectivity through regional architecture in order to create a sense of belonging and ownership within the self, the community and the place. The investigation was carried out through the design of a new caravanserai (ancient hotel) along the ancient trading route of the Silk Road in central Iran. The proposed caravanserai, Deir-e No, lies between an abandoned and a restored caravanserai on the stretch of the Silk Road connecting the current capital city, Tehran, to the previous capital, Esfahan. The issue of placelessness is addressed by reconnecting with the ancient roots of Iran and designing a new bounded place, a modern caravanserai, which considers not only tradition but also the modern context. Design principles extracted from literature and case studies consider the place of tradition in contemporary architecture and embrace the use of local, sustainable materials and techniques, utilising a cohesive, bounded space containing other spaces, and incorporating multi-sensory design techniques. These include utilising light, sound, green space, the sky, fire, water, air movement and texture. Interactions with memory and the emotions are considered through generating an exchange system between the public, semi-public and private spaces. The ancient pattern of the Silk Road and its caravanserais is revitalised and integrated with appropriate modern techniques to establish a timeless pattern language benefitting both the people and the place. The spaces of the new caravanserai are influenced by the spaces of the 1700-year-old Deir-e Gachin Caravanserai ten kilometres to the north, responding to both physical and spiritual needs and desires. Furthermore, Deir-e No facilitates future revitalising of other ancient caravanserais by teaching people construction and agricultural knowledge in the workshop spaces provided. Deir-e No also contains spaces for teaching traditional crafts, galleries to exhibit them, cafés, shops, accommodation, and a bathing place that, in keeping with its traditions, will be used as a spa for gatherings