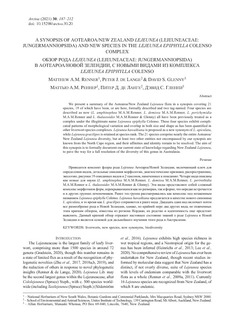 We present a summary of the Aotearoa/New Zealand Lejeunea flora in a synopsis covering 21 species, 19 of which have been, or are here, formally described and two tag-named. Four species are described as new (L. amphinephea M.A.M.Renner, L. demissa M.A.M.Renner, L. perichymidia M.A.M.Renner and L. thalassoides M.A.M.Renner & Glenny) all have been previously treated as a complex under the illegitimate name Lejeunea epiphylla Colenso. These four species exhibit compli cated patterns of morphological variation and overlap in both size and shape as has been quantified in other liverwort species complexes. Lejeunea hawaikiana is proposed as a new synonym of L. apiculata, while Lejeunea gracilipes is retained at species rank. The 21 species comprise nearly the entire Aotearoa/ New Zealand Lejeunea diversity, but at least two other entities not encompassed by our synopsis are known from the North Cape region, and their affinities and identity remain to be resolved. The aim of this synopsis is to formally document our current state of knowledge regarding New Zealand Lejeunea, to pave the way for a full resolution of the diversity of this genus in Australasia

310411 Plant and fungus systematics and taxonomy