The mystery of the god Io 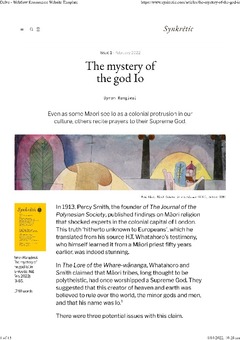 ...These facts have fed an enduring controversy over the authenticity of the Māori god Io. This is a complicated and extensive debate.* Skeptics believe that Io was either an accidental or intentional colonial construct used to present Māori culture as semicivilised to European audiences, because, it was thought, worshipping a Supreme God placed it on a higher rung of an imagined hierarchy of races. Māori believers, meanwhile, accept Io as their god, whether they identify him with the Christian faith, Māori tradition, or both.