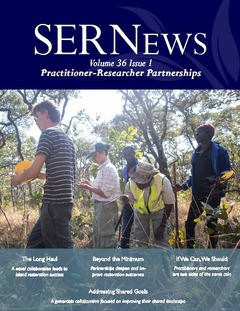 Tiritiri Matangi Island, a scientific reserve in the Hauraki Gulf, is typical of many of New Zealand’s inshore islands and has been degraded over its history by human occupation. An ecological restoration program began in 1984 to revegetate much of the island and to re-establish native wildlife species, gradually improving the complexity of the island ecosystem. Restoration projects such as this are now commonplace in New Zealand, and have been encouraged by government initiatives since 2010 to lessen the impact of introduced plants and animals to which the native species are not adapted. Tiritiri Matangi is managed by a government agency, the Department of Conservation, in partnership with a community volunteer collective that has formal recognition, the Supporters of Tiritiri Matangi (SoTM) (see www.tiritirimatangi.org.nz)