Why do female engineers discontinue their construction careers: A New Zealand perspective 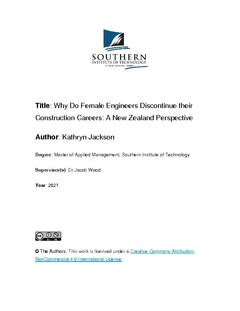 Jackson, K. (2021). Why do female engineers discontinue their construction careers: A New Zealand perspective. (Unpublished document submitted in partial fulfilment of the requirements for the degree of Master of Applied Management). Southern Institute of Technology (SIT), New Zealand. https://hdl.handle.net/10652/5573

The study sought to understand why few female construction engineers progress from graduate roles through to middle and senior management. This was studied through a literature review, industry analysis, and a questionnaire issued to early-career engineers at Downer New Zealand. The study found that the inherently masculine culture of construction companies is hostile to women in various ways. They feel culturally adrift, harassed, separated from informal business networks, and suffer from a lack of role models and clear career paths. Factors that affect retention of all genders include unpleasant working hours and locations. These concerns were echoed in the results of the questionnaire issued to Downer New Zealand staff. They added further concerns about pay progression, and unclear or unfair job descriptions. The perceived inflexible nature of their work means that many respondents felt that a career at Downer New Zealand was incompatible with their future plans to have children. The recommendations include greater inclusion of women when developing initiatives aimed at retaining women – this inclusion could be achieved in a number of ways that would also gain them greater access to networks, role models, and potential career paths. Specific equity targets should be set and published, with a clear focus on reducing discrimination. These targets should include SMART goals, and senior executives should be made accountable for progress.