First record of Zwackhia viridis (Lecanographaceae) from the Chatham Islands 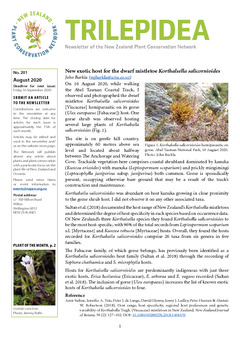 Our knowledge of the Chatham Islands lichenized mycobiota is steadily growing from the 48 species recognized from the islands by Galloway (2007). Since 2008 there has been a concerted effort to collect lichens from the islands by visiting lichenologists resulting in a current, as yet unpublished, listing for the islands of c.352 lichen taxa (de Lange unpubl. data). Along the way a new, seemingly endemic lichen, Lecanora kohu, has been described from the Chathams (Printzen et al. 2017), a fitting replacement for the previous assumed endemic Caloplaca maculata (Galloway 2004) which has since been found on the coastline south of Dunedin, New Zealand (de Lange 2019).

310411 Plant and fungus systematics and taxonomy