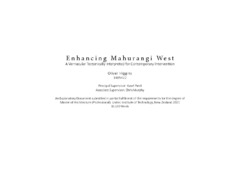 RESEARCH QUESTION How can architectonics enhance a community space in Mahurangi West? ABSTRACT The Mahurangi West community Hall is potentially the oldest school in Northland, built by the local farmers in 1885. It was repurposed as a hall in 1979 and then restored in 2014 by the local community. It is also a category B heritage building. Activities ranging from table tennis to yoga and occasionally weddings take place here. The community of Mahurangi West is tightly knitted, with strong ties to the land. The population is mainly farmers, artists and people who work in urban environments but enjoy the re-energising effects of nature. Living in rural environments often comes with the potential for isolation due to the often large distance neighbours are from each other. A connection, even just visual, is vital to feeling safe and at home in one’s community. The current Hall cannot facilitate the activities needed to create and maintain connections within the community, as it is composed of only one main space with an adjacent kitchen and a block of toilets separate from the Hall. There is also a lack of parking which would enable the site to host more significant events. This lack of flexible spaces presented an opportunity for developing a new community centre with higher functionality. As the current Hall was built in the 1800s and has not changed to facilitate its everyday use, there is an opportunity for providing more buildings that do this. This project aims to develop a series of buildings that tie in with the site’s history but bring a contemporary touch to the community centre. The site must have at least a few interventions that function and look like they are built in the current period, as it will visually represent its relevancy. Providing buildings that respect the site and enhance it will allow the community centre to cherish its past and facilitate events in the present time. This intervention aimed to enhance the local community by providing new, highly functional and detailed buildings relevant to contemporary architecture. The architectonic expression of the design was the primary focus for enhancing the community centre. By focusing on details, structure and materiality, the proposed new buildings will help facilitate the requirements for a community centre and ground them in the context of the 21st Century. The intervention aimed to provide spaces for various functions, with a focus on facilitating community interaction. The design had a solid connection to its local context, which helps to create an environment where people feel at home in their community. This project focused on an appropriate development for the site of the Mahurangi West Hall that responds to its heritage status. This new intervention relates to the site and the local community through its architectural expression and provides a higher level of functionality, creating the opportunity for an enhanced community experience.