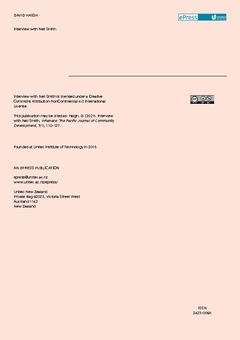 This interview with Neil Smith, carried out in 2002, is the second in a series of interviews with practitioners who have made significant contributions to the field of community development in Aotearoa New Zealand. Neil was very ill but, in spite of the pain, he insisted on completing the interview; it is the story of a man who lived by his values. For example, during World War Two he was a conscientious objector and forced to work as a scrub cutter in various isolated camps. At one camp, he met various lecturers from Victoria University, Wellington, who were also incarcerated for the duration of the war. During this period, he participated in adult education classes, which inspired him. He later studied social work at Victoria University under the same lecturers. Through his involvement in the social workers’ association in the 1970s, he helped persuade Auckland City Council to establish the community development office. Sadly, Neil died shortly after this interview.