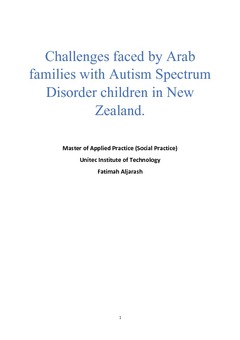 KEY QUESTIONS: 1. What were the family's expectations around autistic spectrum disorder prior to and immediately after their child was diagnosed with autistic spectrum disorder and currently? 2. What has been the family’s ongoing experience of living with a child with autistic spectrum disorder in New Zealand? 3. What has been the quality, from the families’ perspective, of support services for autistic spectrum disorder? 4. What needs to happen, from the families’ perspective, to better support Arab families caring for a child with autistic spectrum disorder? ABSTRACT: Recent figures show an increase in the proportion of children with autism spectrum disorder globally, which affects parents and the family in many ways. In this research, a case study methodology was used for a group of four Arab immigrant families who had a child with autism spectrum disorder in New Zealand. Three were refugee background families and the fourth was a migrant family. The research aimed to identify the most important difficulties that Arab immigrants in New Zealand face with ASD children. Several themes were analysed such as the stress of migration as a cause of autism and developmental delay; the stress of raising a child with autism; managing the mental and physical challenges of family members other than the focus child; autism in relation to culture, gender and language; the impact autism on marital relationships; autism in relation to isolation and stigma, early intervention programmes and accessing services; and finally, lack of family support and counselling. The stresses experienced by all four families included managing more than one child with a disability. The findings of the study revealed that immigration and language stressors were hugely impactful on all participating families. The quality of services provided in New Zealand was acknowledged, but the absence of support from their extended families in their mother country and isolation from the local Arab community (disability stigma) and the New Zealand community (discrimination) left all parents in a depressed state. It is suggested that migration stress may have contributed to maternal distress as a cause of ASD. Lack of fluency in the English language formed a great barrier for families. There was a major need for parents to gain an initial understanding of ASD and be trained in living with ASD in their own language. Even once parents have become informed and aware of the services available, because of language and cultural difficulties, they need greater access to interpreters, Arabic speaking staff, counselling services, home support (particularly for the mothers), and support from the Arab community to be more accepted in community and religious activities.