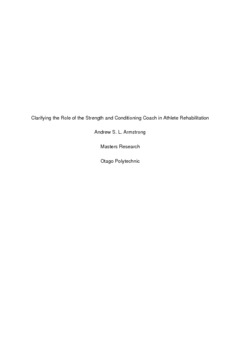 Armstrong, A. (2021). Clarifying the role of the strength and conditioning coach in athlete rehabilitation. (Unpublished document submitted in partial fulfilment of the requirements for the degree of Master of Applied Science). Otago Polytechnic, New Zealand. http://doi.org/10.34074/thes.5481