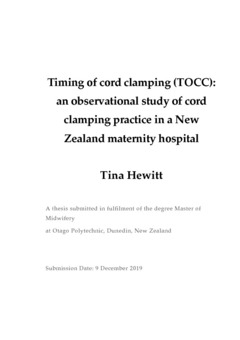 BACKGROUND: When an umbilical cord is left unclamped after birth, a significant proportion of the blood from the placenta flows into the newborn, contributing to approximately one-quarter of total potential blood volume. The routine intervention of immediate cord clamping was introduced as part of active management of the third stage of labour over half a century ago. It has become a growing cause for concern due to the potential harm of preventing the newborn access to its placental blood and subsequent reduction in iron levels. Despite the evidence of potential harm from immediate cord clamping, a study in Canada found that over half of the infants observed in 2006/7 had their cord clamped within 15 seconds of birth (Hutton, Stoll, & Taha, 2013). AIM: The aim of the TOCC study was to investigate cord clamping practice for term vaginal births in a New Zealand tertiary hospital, where the majority of births have a midwife as lead practitioner. METHODS: A stopwatch was used to time the cord clamping interval at 55 term vaginal births in a tertiary maternity hospital. The stopwatch was pressed once at the time of the birth and once when the first clamp was applied to the umbilical cord. Mode of birth (spontaneous or instrumental), maternal position for birth and whether midwives and/or doctors and neonatal practitioner were involved in the birth was documented alongside the cord clamping timing. RESULTS: Cord clamping timing ranged from a minimum of 14 seconds to a maximum of 34 minutes. The median umbilical cord clamping time for all births in the study was 3.5 minutes. The median cord clamping time was likely to be longer when the woman had a spontaneous vaginal birth rather than an instrumental birth; when she birthed in a side-lying or upright position rather than a seated position; when a midwife facilitated the birth rather than a doctor and when there was no neonatal team present at the birth. CONCLUSIONS: The median cord clamping time of 3.5 minutes is aligned with current local, national and international guidelines. Midwives are likely to facilitate longer cord clamping times as they are more likely than doctors to attend spontaneous uncomplicated births which do not warrant immediate separation of mother and baby for preventative or resuscitative measures. Further discussion is warranted on how longer cord clamping times fit with active management of placental birth and how we can achieve optimal cord clamping when newborn resuscitation is indicated.