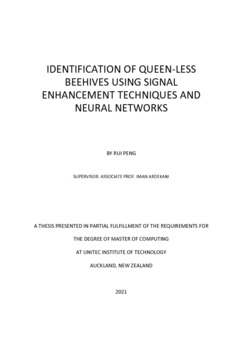 Beekeeping has a long history of about 180 years in New Zealand. The first group of honey bees introduced has expanded to approximately one million registered beehives by now. An increasing number of residents have been associated with beekeeping to process and produce world-famous New Zealand honey products. The honey market competition has become more severe than before due to the slow growth of pollen resources, weather change, and the limited number of experienced apiarists. New Zealand beekeepers have lost approximately 10% of bee colonies every winter since 2015, caused mainly by the queen bee problems. In this situation, apiculture needs the support of new technologies urgently. Since the 1980s, various bee monitoring methods based on processing a wide range of physical signals, including audio, temperature, video, weight, vibration, number of bees, humidity, and O2/CO2 content, have been developed to prove the feasibility of precision beekeeping. Unfortunately, few of these systems have been applied in practice because it can be very complicated to analyse the honey bee signals indicating significant statuses, like queen-less beehives. According to previous studies, monitoring the audio signals generated by a beehive can help us predict nearly all of the crucial statuses of the beehive. Hence, this research proposes to identify queen-less beehives by monitoring the bee audio signals. However, the bee audio signals are always acquired with natural environmental noise, which means the noisy bee signals captured from the beehive must be appropriately filtered to obtain the enhanced signals close to the original signals generated by bees. This thesis proposes an approach to identify queen-less beehives by using audio signal enhancement techniques and neural networks. More particularly, the audio signals corrupted by rain noise are enhanced by Multi-band Spectral Subtraction and Wiener filtering techniques, respectively. The improved Mel-frequency Cepstrum Coefficient (IMFCC) of the enhanced signals are extracted as input features of a Multilayer Perceptron (MLP) model to classify queen-less beehives. The result shows that this approach improves the classification accuracy by around 10% to 29%, depending on the quality of the input signals. It is also reported that the proposed system has a higher classification accuracy and better learning ability than other systems using KNN and SVM algorithms.