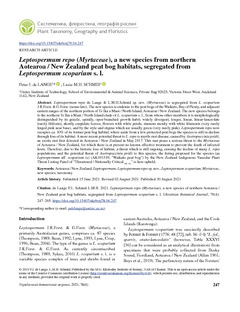 Leptospermum repo de Lange & L.M.H.Schmid sp. nov. (Myrtaceae) is segregated from L. scoparium J.R.Forst. & G.Forst. (sensu lato). The new species is endemic to the peat bogs of the Waikato, Bay of Plenty, and adjacent eastern ranges of the northern portion of Te Ika a Maui / North Island, Aotearoa / New Zealand. The new species belongs to the northern Te Ika a Maui / North Island clade of L. scoparium s. l., from whose other members it is morphologically distinguished by its gracile, spindly, open-branched growth habit; widely divergent, longer, linear, linear-lanceolate (rarely filiform), shortly cuspidate leaves; flowers with white petals, stamens mostly with white filaments (very rarely tinged pink near base), and by the style and stigma which are usually green (very rarely pink). Leptospermum repo now occupies ca. 10% of its former peat bog habitat, where aside from a few protected peat bogs the species is still in decline through loss of its habitat. A more recent potential threat to L. repo is myrtle rust disease, caused by Austropuccinia psidii, an exotic rust first detected in Aotearoa / New Zealand in May 2017. This rust poses a serious threat to the Myrtaceae of Aotearoa / New Zealand, for which there is at present no known effective treatment to prevent the death of infected hosts. Therefore, due to the historic loss of habitat, a threat which is still ongoing, causing the decline of many L. repo populations; and the potential threat of Austropuccinia psidii to this species, the listing proposed for the species (as Leptospermum aff. scoparium (c) (AK191319; "Waikato peat bog") by the New Zealand Indigenous Vascular Plant Threat Listing Panel of "Threatened / Nationally Critical DP, De" is here upheld.

2021 P.J. de Lange, L.M.H. Schmid. Published by the M.G. Kholodny Institute of Botany, NAS of Ukraine. This is an open access article under the terms of the Creative Commons Attribution License (http://creativecommons.org/licenses/by/4.0/), which permits use, distribution, and reproduction in any medium, provided the original work is properly cited.