Beyond the built: Exploring architecture’s role as a modality for contemplation and personal restoration 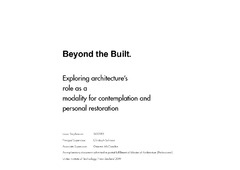 Stephenson, L. (2020). Beyond the built: Exploring architecture’s role as a modality for contemplation and personal restoration. (Unpublished document submitted in partial fulfilment of the requirements for the degree of Master of Architecture (Professional)). Unitec Institute of Technology, New Zealand. Retrieved from https://hdl.handle.net/10652/5392

RESEARCH QUESTION: How can architecture embody space, nature and contemplation within the urban environment? As our surroundings and way of life become increasingly urbanised, how can architecture contribute as a modality for personal restoration and contemplation for the city’s inhabitants? ABSTRACT: The presence of a moment or a small gesture of space and simultaneously, the flow of time, can trigger the awareness of one’s own existence. In this project, “Beyond the Built,” this existential space is understood not merely as a void but a gap, which transcends human experience beyond the built. Humans have long sought this transcendence, spiritually and emotionally, through their environment. Much like architecture’s ability to go beyond a utilitarian function, nature has provided a place for this transcendental exchange to take place, offering a place for personal restoration. Author Emma Marris suggests that the nature of nature is changing with the times. The 19th century theorist August Schmarsow was one of the first to discuss the concept ‘Raumgefühl,’ the feeling for space. A concept that also resonated with philosopher Martin Heidegger, to whom space is of an entire inner and outer experiential nature. This is a notion that is more relevant today than ever before. As a result of the ever-increasing urbanisation of the modern-day culture and landscape, the built environment does not frequently offer this intrinsic condition for respite. Architectural theorist Juhani Pallasmaa acknowledges this modern-day cultural disconnection between people and their environment, and therefore themselves. Pallasmaa argues this to be the result of a mass-dulling of the senses. Even earlier than Pallasmaa, c.1970's, architectural historian Bruno Zevi approached this lack of cultural engagement with the built environment, a result of urbanisation's dilution of meaningful architecture. This project therefore aims to generate this connection through investigations into existential spatial moments, and through architecture which embodies the essence of nature’s restorative qualities to provide a place for contemplative restoration within the urban realm. Connecting with one’s intrapersonal state is contemplative and restorative and is not a new concept. Contemplation is still present through typologies that foster solitude such as museums, art galleries, as well as through devotional practice. Yet, their programme can appear non-inclusive to some. Julio Bermudez acknowledges the movement away from the exclusive adherence of devotional practice, suggesting that it requires a contemporary adaptation which is secular and without symbolic gestures. Since long before religion, contemplation has provided a modality for introspection, respite, reflection and presence within and of oneself. The interest in spiritual outlets and modalities for contemplation has declined in the urban context, particularly in modern society, therefore this project is an experiential response to this cultural and personal disconnection. Through a non-exclusive programme, this project aims to provide a contemporary opportunity for contemplation within the cityscape. Nature has likewise suffered the effect of becoming a modern-day construct. As a result, it is less accessable as a respite and thus requires a new lens with which urban nature can be seen. Space, contemplation and nature are embodied through architecture to provide Auckland city’s inhabitants with a modality for contemplative restoration.