The tomorrow of yesterday: Understanding the layers of built history 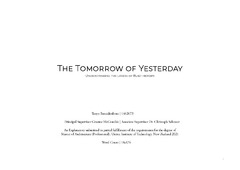 Bezuidenhout, T. (2021). The tomorrow of yesterday: Understanding the layers of built history. (Unpublished document submitted in partial fulfilment of the requirements for the degree of Master of Architecture (Professional)). Unitec Institute of Technology, New Zealand. Retrieved from https://hdl.handle.net/10652/5383

RESEARCH QUESTION: How can the contemporary reconstruction of a damaged building honour the layers of a building’s history? ABSTRACT: Historic buildings contain more than bricks and timber, they contain memories, experiences, philosophies, agendas, and history, all of which become threatened when the building gets damaged and no longer plays an active role in our society. As a result, conservation efforts are vital in preserving the history of these buildings and ensuring they continue on to our future. During the unfortunate event where a historic building is damaged, there is often controversy over whether to repair and restore or not. If one does restore it, to which stage of the building’s history would one have the building return to? What makes a building’s age more important than its current history? All too often will moments of history be wiped from a historic building so that it can be returned to its original state. But what is original? Something that happened one hundred years ago or last week? This project challenges the conservation standards often used when historic buildings become damaged. In the aftermath of the September 2010 and February 2011 Canterbury earthquakes, many historic buildings remain as fragments of what they once were, needing more funding to allow for the complete restoration of those buildings. The Canterbury Provincial Council Chambers is a perfect example of this. First built in 1859, the Provincial Council Buildings bore witness of a colony’s development into a nation, reflecting the moments of prosperity, growth, and confidence throughout the provincial government years. Sustaining significant damage during the earthquakes, the Provincial Council Buildings have remained idle ever since. Thus, the purpose of this project is to find relevance in conservation philosophies of architects, theorists, and historians. This project explores theories presented by John Ruskin, William Morris, Eugène-Emanuel Viollet-le-Duc, and Alois Riegl of the 19th century and with a particular focus on architect David Chipperfield’s processes and theory behind his Neues Museum design, to create a design response that accepts all layers of a building’s history and the passing of time, allowing the walls to stand ‘without silence’. It acknowledges the new within the old but also that the past is just as important as the present. The result is a building that accepts growth and change as a natural part of the building’s life and a building that has made permanent the memories of a life gone by.