Lifeless to lively: The development of stadium architecture 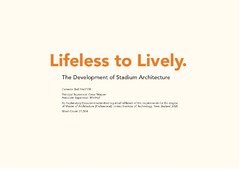 Bell, C. (2020). Lifeless to lively: The development of stadium architecture. (Unpublished document submitted in partial fulfilment of the requirements for the degree of Master of Architecture (Professional)). Unitec Institute of Technology, New Zealand. Retrieved from https://hdl.handle.net/10652/5361

RESEARCH QUESTION: How can an existing stadium and its urban environment become more interactive through the incorporation of different programmes? ABSTRACT: The trend of stadium design is becoming increasingly multi-purpose orientated to maximise the usage of the architecture. Too often, stadiums are left as empty shells that offer nothing to the community or urban environment outside of their singular function. These large structures act as landmarks for a city or country’s sporting heritage, yet they attract minimal interaction regularly. The reality is that stadiums are lifeless architecture. This is even more apparent in New Zealand, where stadiums feel empty during major events as well. Large capacity venues are used to host relatively small teams, and as a result, the match-day atmosphere is underwhelming. For example, the Wellington Phoenix (football) averaged a home attendance at Wellington Regional Stadium of 8,533 for the 2018/2019 season, which equates to less than one-quarter of the stadium’s total capacity. Similarly, Eden park can host up to 50,000 people for any event, yet the Auckland Blues (rugby union) recorded a season-low home attendance of 5,000 in 2018. A brand-new Auckland waterfront stadium has been mooted as a solution to New Zealand’s stadium problem, but there is nothing to suggest this new stadium would not suffer the same fate. Furthermore, it would mean the end for Eden Park and the downgrade of Rarotonga Mount Smart Stadium to a high-performance training facility. Both these stadiums have made key contributions to New Zealand’s sporting heritage by hosting major international events such as the Commonwealth Games, and multiple World Cups across different sports. The issue is not whether New Zealand has the capabilities to host such events, rather it is the fact these stadiums are not as attractive as they once were. This is reinforced by the fact that the excitement of watching a live event is no longer enough to persuade fans to leave their couches. Constant developments of technology mean viewers have everything they need at home with the touch of a button. Consequently, stadiums are faced with the challenge of becoming more interactive to provide unique experiences that fans cannot get elsewhere. The improvement of the match-day experience is obviously important, but more consideration needs to be given to what happens after the event. From a status point of view, these buildings are the focal points of an urban landscape. Whereas from a practical point of view, these buildings are dysfunctional and underutilized. The requirement nowadays is for stadiums to be more like the former and operate as social hubs that enhance their communities and provide more usable and accessible facilities. This would be easier to achieve when designing a new stadium since aspects like accessibility, adaptability, and utilization can all be integrated into the initial design. The same cannot be said for poorly designed existing stadiums. In this case, is it still possible for an existing stadium to be successfully redeveloped, or do modern requirements surpass the need for these stadiums altogether? SITE: Rarotonga Mount Smart Stadium.