On New Urbanism in Auckland: A study in the integration of New Urbanist principles within the context Auckland's outer suburbs 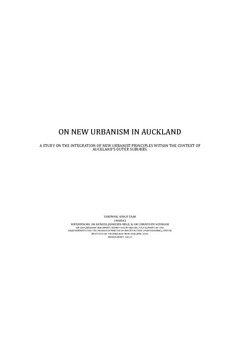 Taak, T. S. (2020). On New Urbanism in Auckland: A study in the integration of New Urbanist principles within the context Auckland’s outer suburbs. (Unpublished document submitted in partial fulfilment of the requirements for the degree of Master of Architecture (Professional)). Unitec Institute of Technology, New Zealand. Retrieved from https://hdl.handle.net/10652/5348

RESEARCH QUESTION: How can design principles of New Urbanism be used to create a mixed-use urban development in Auckland’s growing suburbs? ABSTRACT: The city of Auckland has seen rapid growth in recent years. This in turn has led to the creation of rapidly developed suburban areas that may lack a sense of place, character, and structure. Flat Bush, a relatively new development in South Auckland, exemplifies such conditions in most facets of its design. These conditions have been propagated through the use of functional zoning, a concept born out of the modernist movement, which sees the separation of functions and activities into distinct and often isolated zones – resulting in a disconnected urban structure that favours the car over the pedestrian. In addition, the lack of a sense of place and character may be attributed to translation of industrial logic1 into architectural design, which has resulted in the creation of ‘cookie cutter’ houses repeated ad nauseam. One measure by which a city a city may address such conditions is through the use of Traditional Urban design and Traditional Architectural design principles. Both approaches seek to address the shortcomings of contemporary design through the use of pre-existing models by adapting them to a contemporary urban environment. It is through the principles of New Urbanism, as laid out in Charter of the New Urbanism, that traditional urban design is approached throughout the research. It is Leon Krier’s pioneering book Architecture: Choice and Fait that provides the crucial link between the two approaches of traditional design – linking the Classical design language to New Urbanism under one design outcome. The research draws upon a number of precedents that display either one of the design approaches or both in order to inform the adaptation of traditional principles into Flat Bush. Further, the research proposes the development of a traditional neighbourhood within the core of Flat Bush as a tool to mitigate the effects of functional zoning and its associated effects. Therefore, the research will investigate the interaction between different building typologies within a traditional urban structure through the use of Form Based Codes, with the aim of integrating functions and increasing density within an urban environment that is conducive to walkability, thereby, promoting and increasing potential interactions with residents themselves and with their urban environment. Site project: Ormiston Central, Flat Bush, Auckland.