The rabbit, the ermine and the gaze : an account of introduction, ramifications and the role art plays as a mechanism to create awareness of scientific issues 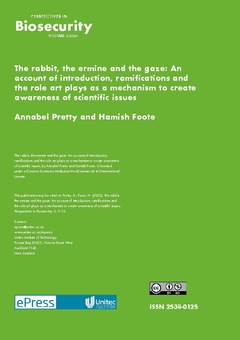 Pretty, A., Foote, H. (2020). The rabbit, the ermine and the gaze: An account of introduction, ramifications and the role art plays as a mechanism to create awareness of scientific issues. Perspectives in Biosecurity, (2020/5), 5-16. ISSN: 2538-0125. Retrieved from https://www.unitec.ac.nz/epress/index.php/perspectives-in-biosecurity-5/

This paper provides an account of the process and ramifications of the introduction of exotic species into Aotearoa New Zealand during the late 19th century. These introductions, which comprised both flora and fauna, commenced with the voyages of discovery and were motivated in the first instance by the necessity for food. While some species failed to acclimatise, others, such as the rabbit and the domestic cat, flourished, and in time began to wreak havoc on the landscape and existing biota. The response to these unexpected outcomes, which included parliamentary debate and various biological control measures, again produced unexpected consequences. At present in Aotearoa, these include naturalised populations of exotic predators, the occurrence of leucism due to a shrinking gene pool, and a variety of endemic species now poised on the cusp of extinction. The role literature and fine art played during the period of introduction in the 19th century, and continues to play, is also examined. At the outset, ‘picturesque’ depictions were commonplace; these have given way to more contemporary approaches, which provide a means for understanding, establishing and defining the identity of place and the species that inhabit it. The paper concludes with a case study of a series of contemporary egg tempera paintings, which illustrates various species; draws attention to their status; highlights the consequences of their existence in Aotearoa; and demonstrates how the confluence of art and science can act as a mechanism to raise awareness

The rabbit, the ermine and the gaze: An account of introduction, ramifications and the role art plays as a mechanism to create awareness of scientific issues, by Annabel Pretty and Hamish Foote, is licensed under a Creative Commons Attribution-NonCommercial 4.0 International License.