Dying with dignity : an architectural placebo 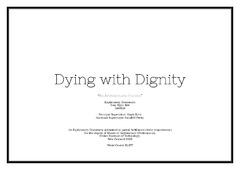 Ngan Kee, A. (2020). Dying with dignity : an architectural placebo. (Unpublished document submitted in partial fulfilment of the requirements for the degree of Master of Architecture (Professional)). Unitec Institute of Technology, New Zealand. https://hdl.handle.net/10652/5228

RESEARCH QUESTION: Can the architectural form and layout of hospices be designed to be de-institutional, whilst maintaining their healthcare functions, so that the building acts as a placebo to help celebrate the end of life and allow for dignity in death for the terminally ill? ABSTRACT: Medical advancements have led to higher life expectancies and with longevity comes an increased chance of people experiencing chronic illnesses towards the ends of their lives and a need for palliative care. As a result, more and more people are dying in institutional settings such as hospitals, rest homes and hospices rather than the preferred place of home. Healthcare institutions are consistently criticised for being emotionally inappropriate environments in which to die. The design of hospices has been based on the design of hospitals which, in turn, is based on the ‘architecture of control’ that is characterised by containment, exclusion, surveillance and authority. These controls conflict with the reasons for expecting to die at home. Control through containment, surveillance and authority are not compatible with care, hopefulness, participation and dignity. This project critically reviews the architecture of hospices and examines precedents that begin to de-institutionalize these building types by using ‘informality’ as a design tool. The research analyses the processes behind ‘informal’ design and adopts a counterintuitive method of a grid on which a masterplan is constructed. Like a chess board which, at first sight, appears rigid and constraining, the grid (like a chess game) allows for a multitude of permutations to be examined and which result in a design that implements principles that de-institutionalize architecture. The brief for the building was based on a detailed, published account of the activities, professionals, families, community and guests that make up the functioning of a hospice. My intention is a design that not only strikes the balance between medical care and patient-friendly design but also produces an architecture that acts as a placebo and thereby celebrates the end of life. The internal layout of the building is designed on principles of de-institutionalization that include, where possible: avoiding corridors, dead-ends, symmetry and barriers but also enhancing wayfinding, areas for activities, areas that allow for independence and mutual support and many other characteristics. The external form of the building gives a sense of informal planning, such as a favela or hillside village, and the roofline enhances this by implementing separate roofs over separate spaces which continues a tradition in the hills around Wellington where the site is proposed. Site: Charles Plimmer Park on Mount Victoria overlooking Wellington Harbour.