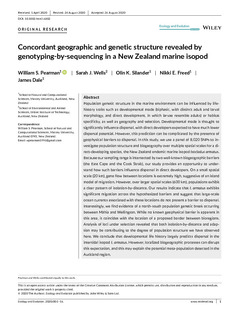 Population genetic structure in the marine environment can be influenced by lifehistory traits such as developmental mode (biphasic, with distinct adult and larval morphology, and direct development, in which larvae resemble adults) or habitat specificity, as well as geography and selection. Developmental mode is thought to significantly influence dispersal, with direct developers expected to have much lower dispersal potential. However, this prediction can be complicated by the presence of geophysical barriers to dispersal. In this study, we use a panel of 8,020 SNPs to investigate population structure and biogeography over multiple spatial scales for a direct- developing species, the New Zealand endemic marine isopod Isocladus armatus. Because our sampling range is intersected by two well-known biogeographic barriers (the East Cape and the Cook Strait), our study provides an opportunity to understand how such barriers influence dispersal in direct developers. On a small spatial scale (20 km), gene flow between locations is extremely high, suggestive of an island model of migration. However, over larger spatial scales (600 km), populations exhibit a clear pattern of isolation-by-distance. Our results indicate that I. armatus exhibits significant migration across the hypothesized barriers and suggest that large-scale ocean currents associated with these locations do not present a barrier to dispersal. Interestingly, we find evidence of a north-south population genetic break occurring between Māhia and Wellington. While no known geophysical barrier is apparent in this area, it coincides with the location of a proposed border between bioregions. Analysis of loci under selection revealed that both isolation-by-distance and adaption may be contributing to the degree of population structure we have observed here. We conclude that developmental life history largely predicts dispersal in the intertidal isopod I. armatus. However, localized biogeographic processes can disrupt this expectation, and this may explain the potential meta-population detected in the Auckland region.

This is an open access article under the terms of the Creative Commons Attribution License, which permits use, distribution and reproduction in any medium,provided the original work is properly cited.