Pūrākau : our world is made of stories 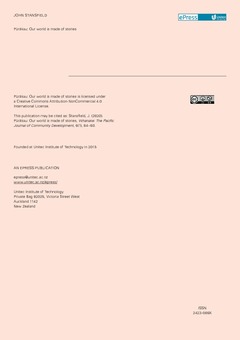 Ua ta‘u mai e Pālagi i a i tatou, o le lalolagi e faū i atoma [atoms], ae tatou Sāmoa e lē valelea-matou [tagata-Sāmoa] e te iloa o le lalolagi e tele tala. The white man has told us that the world is made of atoms, but we Sāmoans, we are not silly, we know the world is made of stories. BACKGROUND: Raumanga is a suburb of Whangārei in the province of Northland, New Zealand. Northland is New Zealand’s most impoverished province (Connelly et al., 2019) and has a significant concentration of Indigenous Māori and a growing renaissance of Māori-led governance and enterprise. [...] The Raumanga Community Group, sometimes known as the Raumanga Community Committee, has met regularly for more than a year and is currently undergoing incorporation as the Raumanga Community Roopu (group, committee or association). This practice note from the field is an attempt to record and understand the importance of story in the development of identity and to situate a small, local case study within a broader debate about the nature of community development. [...] Community-led development is the latest iteration of engagement between councils and communities. It is, in my view, a far weaker and depoliticised method than its antecedents in community development. The principal differences between the two methods are described in different ways by the adherents to both. The community development primer originally written by Ewen Derrick and updated by David Haigh in the late 1990s contains a chapter explaining community-led development (Bijoux et al., 2015). In this chapter, the authors describe community-led development as an approach born out of a new collaborative approach:

Pūrākau: Our world is made of stories is licensed under a Creative Commons Attribution-NonCommercial 4.0 International License.