Measuring e-government development : the haves and the have-nots 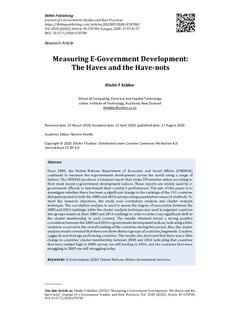 Since 2003, the United Nations Department of Economic and Social Affairs (UNDESA) continued to measure the e-government development across the world using a range of indices. The UNDESA produces a biannual report that ranks UN member states according to their most recent e-government development indices. These reports are widely used by egovernment officials to benchmark their country’s performance. The aim of this paper is to investigate whether there has been a significant change in the rankings of the 191 countries that participated in both the 2005 and 2016 surveys using quantitative research methods. To meet the research objectives, the study uses correlation analysis and cluster analysis technique. The correlation analysis is used to assess the degree of association between the 2005 and 2016 rankings, while the cluster analysis technique was used to segment countries into groups based on their 2005 and 2016 rankings in order to detect any significant shift in the cluster membership in each country. The results obtained reveal a strong positive correlation between the 2005 and 2016 e-government development indices, indicating a little variation occurred in the overall ranking of the countries during this period. Also, the cluster analysis results revealed that there are three distinct groups of countries/segments: Leaders, Laggards and Average performing countries. The results also disclosed that there was a little change in countries’ cluster-membership between 2005 and 2016 indicating that countries that were ranked high in 2005 survey are still leading in 2016, and the countries that were struggling in 2005 are still struggling today.