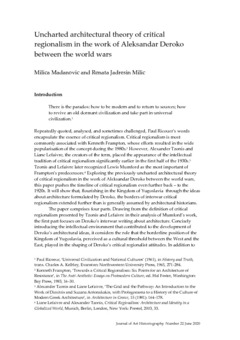 The paper comprises four parts. Drawing from the definition of critical regionalism presented by Tzonis and Lefaivre in their analysis of Mumford’s work, the first part focuses on Deroko’s interwar writing about architecture. Concisely introducing the intellectual environment that contributed to the development of Deroko’s architectural ideas, it considers the role that the borderline position of the Kingdom of Yugoslavia, perceived as a cultural threshold between the West and the East, played in the shaping of Deroko’s critical regionalist attitudes. In addition to the five points offered by Lefaivre and Tzonis, Deroko’s text helped identify another essential premise of critical regionalism. Critical regionalism conditions design functionality, maintaining that architecture should be developed as a response to the unique conditions of the physical and socio-cultural context. The other three sections move the discussion into the domain of interwar architectural practice. The Hall of Residence for the Orthodox Theological Faculty (1937), The Church of Saint Sava (1926) and Deroko’s holiday house (1939), his three most famous interwar projects, serve as case studies for the implementation of the main points of critical regionalism in his designs.

This work is licensed under a Creative Commons AttributionNonCommercial 4.0 International License