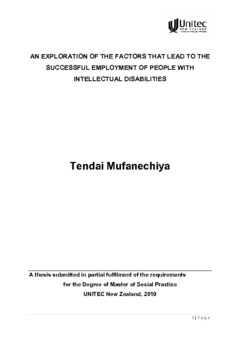 Mufanechiya, T. (2019). An exploration of the factors that lead to the successful employment of people with intellectual disabilities. (Unpublished document submitted in partial fulfilment of the requirements for the degree of Master of Social Practice). Unitec Institute of Technology, Auckland, New Zealand. Retrieved from https://hdl.handle.net/10652/4979

Employment is an important aspect of being a participating and valued member of the community. The term social inclusion is commonly used to describe the need to incorporate people with intellectual disabilities in different facets of the community, including employment. This research examines how six people with intellectual disabilities (ID), who are supported by IDEA Services Ltd in South East Auckland, with shared similarities, have fared differently in mainstream employment. Three of the people were successful in obtaining and keeping jobs, while the other three were unsuccessful. A strength-based approach is used to demonstrate the fact that, given the right environment and support, there could be a possibility of more people with intellectual disabilities succeeding in the mainstream employment sector. Literature shows how different models have been used historically, in working to gain employment for people with ID and how currently there are some models, both internationally and nationally, which appear to be working well. The concept of social role valorisation (SRV) as an aspect of normalization is taken into consideration when looking at inclusion with ID, from the historical perspective. Though it has its limitations, SRV is important in that it emphasizes the fact that people with ID should not stand out, but be given as much opportunity as possible, to participate as the rest of the members of society who do not have a disability. It also stresses the importance of training people with disability, to give them skills that help them to fit into the community. An important aspect from literature is how the social model plays a vital role for people with intellectual disabilities in getting and keeping jobs. Two international and one local successful model are used as examples of what has been done to give people with ID a chance in the employment sector. There are specific characteristics that the models possess, which have made them successful in helping the people to obtain and maintain employment. However, possibly both internationally and locally, there is more that needs to be done to get more people with ID into employment. The transformative emancipatory paradigm as part of the methodology, takes centre stage in this research because of its focus on social justice. A mixed methods approach is used, which includes a focus group and semi structured interviews, which are qualitative. At the same time, it makes use of a quantitative survey assessment. The focus group is made up of the six participants with ID, while the semi-structured interviews encompassed the support network of the people with intellectual disabilities, including the employers. The main tool for quantitative data collection was the Supported Independent Living Assessment adapted from Australia and adjusted to suit the New Zealand context. Government policies, including international conventions like the United Nations Convention on the Rights of Persons with a Disability and IDEA Services policies are also examined in terms oftheir role in the employment of people with intellectual disabilities. A non-random, purposive quota sampling method was used to select the participants with intellectual disabilities. This gave an opportunity to acquire an information rich sample, which was diverse enough to give the research validity. The study shows how the three people with intellectual disabilities have been able to obtain and keep jobs. It examines the environmental factors and the personal attributes of the people, and the role these have played in their success in the employment sector. On the other hand, it also examines the possible causes for the other group of three participants with ID not being able to have the same kind of success. The role each factor has had on those who have been successful and those who have not, is examined to see how it may be replicated for the successful cases or enhanced for those who have not been successful. In addition to that, the personal characteristics of the participants from the two groups are also examined to see the role they play in their success or lack of success.