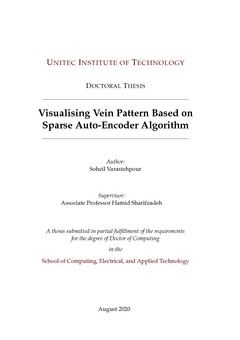 Varastehpour, S. (2020). Visualising vein pattern based on sparse auto-encoder algorithm. (Unpublished document submitted in partial fulfilment of the requirements for the degree of Doctor of Computing). Unitec Institute of Technology, Auckland, New Zealand. Retrieved from https://hdl.handle.net/10652/4977

RESEARCH QUESTIONS: Q1: How is it possible to apply deep learning algorithms such as Autoencoder (AE) instead of current simple neural networks with limited capabilities for uncovering vein pattern? Q2: Can deep learning algorithms such as AE be utilised for the preprocessing enhancement of input colour images for vein visualisation? Q3: Does the new proposed algorithm work on random internet images with different qualities? ABSTRACT: Criminal and victim identification is extremely critical in forensic investigations such as child exploitation, which is considered to be one of the fastestgrowing crimes. Child exploitation is linked to a chain of other serious crimes from human trafficking to under-age sex and sexual abuse. Significant research effort has been expended to develop biometric traits including face, palmprint, deoxyribonucleic acid (DNA), fingerprint and dental identification systems. Even though these authentication systems are among the most common biometric traits employed, and well-established enough to be reliably considered for personal identification purposes, these traits are not applicable to child pornographic images, where criminals usually cover their faces and only non-facial skin is partially observable. Recent investigations have revealed that organisations of pedophiles routinely exchange child pornography for sexual gratification and exploitation of children. Pedophiles are usually careful not to show their faces in images for fear of identification. The problem of child exploitation is increasing due to the proliferation of such material electronically and the lack of effective identification technology. Development of effective methods to identify pedophiles based on partial images of skin is an essential measure to stop child sexual exploitation. Traditionally, it was impossible to use vein patterns for forensic investigation, because they were almost invisible to the naked eye in colour images taken by consumer cameras. Recently, a new research area, based on nonfacial skin features such as vein patterns, has been developed. However, these methods suffer from several weaknesses across different cases, ranging from skin diversity and hairy bodies to subjects with a high volume of dermis fat in which the vein pattern cannot be uncovered. In addition, most of the previous methods are highly dependent on the quality of pictures and how the image enhancement has been processed. With current limitations in enhancement and diversity of skin types, it might still be practically impossible to use vein patterns for forensic investigation. To use vein patterns in forensic investigation, the author proposed a new method to uncover hidden patterns by using the auto-encoder algorithm and image contrast and quality enhancement by using denoising auto-encoder algorithm to enhance the robustness of vein visualisation and feature extraction. A pair of synchronised colour and near-infrared (NIR) images are used to generate the skeletonised vein patterns for verifying the outcome of the proposed method and measure the length of veins by using mean vein diameter. The experimental results on 605 colour images and 605 infrared images showed that the feature extraction performance of the vein patterns from the colour images is comparable with that from the infrared images. Furthermore, the proposed method was also applied on the random internet images such as hands, arms, thighs, chests from men, women, and children samples. Though these images were taken in uncontrolled environments and the subjects had different poses, the proposed method can uncover veins. These results indicate that the potential of using vein patterns in forensic analysis might be practical for forensic investigations.