Because the internet : re-framing film school for the 21st century 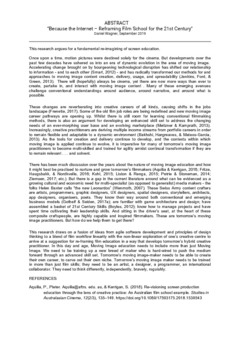 This research argues for a fundamental re-imagining of screen education.  Once upon a time, motion pictures were destined solely for the cinema. But developments over the past few decades have ushered us into an era of dynamic evolution in the area of moving image.  Accelerating change brought on by bourgeoning technological disruption has shifted our relationship to information - and to each other (Smart, 2012) - and has radically transformed our methods for and approaches to moving image content creation, delivery, usage, and spreadability (Jenkins, Ford, & Green, 2013).  There will (hopefully) always be cinema, yet there are now more ways than ever to create, partake in, and interact with moving image content. Many of these emerging avenues challenge conventional understandings around audience, around narrative, and around what is possible. These changes are reverberating into creative careers of all kinds, causing shifts in the jobs landscape (Frenette, 2017). Some of the old film job roles are being redefined and new moving image career pathways are opening up. Whilst there is still room for learning conventional filmmaking methods, there is also an argument for developing an enhanced skill set to address the changing needs of an ever-morphing user base and an evolving marketplace (Meitzner & Kamprath, 2013). Increasingly, creative practitioners are deriving multiple income streams from portfolio careers in order to remain flexible and adaptable to a dynamic environment (Bakhshi, Hargreaves, & Mateos-Garcia, 2013). As the tools for creation and delivery continue to develop, and the contexts within which moving image is applied continue to evolve, it is imperative for many of tomorrow’s moving image practitioners to become multi-skilled and trained for agility amidst continual transformation if they are to remain relevant . . . and solvent.  There has been much discussion over the years about the nature of moving image education and how it might best be practised to nurture and grow tomorrow’s filmmakers (Aquilia & Kerrigan, 2018; Fritze, Haugsbakk, & Nordkvelle, 2016; Kohl, 2015; Liston & Renga, 2015; Petrie & Stoneman, 2014; Ziemsen, 2017; etc.). But there is a gap in the current literature around what can be evidenced as a growing cultural and economic need for multi-specialist (as opposed to generalist) media makers - the folks Helen Baxter calls “the new Leonardos” (Wenmoth, 2007). These Swiss Army content crafters are artists, programmers, graphic designers, UX designers, spatial designers, storytellers, architects, app designers, organisers, poets. They know their way around both conventional and emerging business models (Gothelf & Seiden, 2017a); are familiar with game architecture and design; have assembled a basket of 21st Century Skills (Boyles, 2012); know how to manage projects and have spent time cultivating their leadership skills. And sitting in the driver’s seat, at the heart of these composite craftspeople, are highly capable and inspired filmmakers. These are tomorrow’s moving image practitioners. But how do we help them to get there? This research draws on a fusion of ideas from agile software development and principles of design thinking to a blend of film workflow linearity with the non-linear exploration of one’s creative centre to arrive at a suggestion for re-framing film education in a way that develops tomorrow’s hybrid creative practitioner. In this day and age, Moving Image education needs to include more than just Moving Image. We need to be training up a new breed of maker who is hard-wired to push the medium forward through an advanced skill set. Tomorrow’s moving image-maker needs to be able to create their own career, to carve out their own niche. Tomorrow’s moving image maker needs to be trained in more than just film skills; they need to be an artist, a designer, a programmer, an international collaborator. They need to think differently, independently, bravely, roguishly.