Back to earth : earth building in Aotearoa New Zealand 1945-65 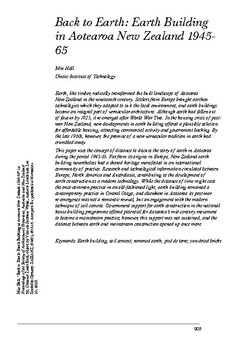 Earth was once widely used as a building material in Aotearoa New Zealand; it was an integral part of the vernacular architecture. Māori used earth in various ways and nineteenth century European settlers brought earthen technologies from their countries of origin. Cob, sod, adobe, wattle and daub, and rammed earth were adapted to suit the local materials, and many of these early buildings still survive. However, earth construction fell out of favour during the twentieth century; by 1925 it was all but non-existent. After WW2 a new interest emerged in a number of places, for reasons that varied with circumstance. At Riverside, a fledgling pacifist community near Nelson, the motivation was pragmatic. They had no houses, no money and plenty of suitable soil. In Whanganui, returning soldiers, inspired by the earthen houses they experienced while stationed in Europe, built earth houses for their families. Neither group of builders looked back to pioneer traditions, rather, they looked to modern technology and current research in soil engineering, in particular the work being carried out at the University of Canterbury by P.J. ('Pip') Alley. Alley was motivated by his concern for the wholesale felling of native forests for house building. His experiments with Canterbury soils showed they were imminently suitable for soil cement wall construction and subsequent publication of his research attracted the attention of both owner builders and commercial builders who built houses under his guidance. However, Alley’s vision of earthen walled houses once more becoming part of the vernacular is yet to be realised. Using a combination of published and unpublished literature, interviews, and critical investigation of surviving houses in five locations, this paper looks back and seeks to record and interrogate a key moment in the history of earth building in Aotearoa New Zealand. Aotearoa is a long way from anywhere. When organised settlement began in the mid nineteenth century immigrants brought building techniques, including earthen ones, from their distant homelands. Earthen walled houses were common place until processed timber became available in sufficient quantity to supplant the use of earth as the major construction technique for house building. By the 1930s building with earth had become rare in Aotearoa New Zealand, but after the second world war a new interest emerged. That interest occurred in a number of places and the reasons for its reappearance varied according to circumstance. At the fledgling pacifist community at Riverside near Nelson the motivation was pragmatic: they had no houses, no money and plenty of suitable soil.

Copyright of this volume and the published individual papers (which are also available for individual download) belongs to SAHANZ. Copyright of the content of individual contributions remains the property of the named author or authors.