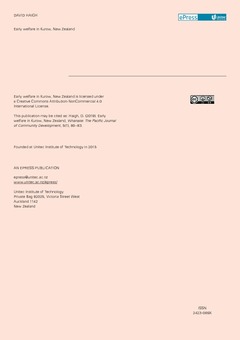 This story is taken mainly from the booklet Four Shillings and Threepence (2008), produced by the Kurow Heritage & Information Centre. One of New Zealand’s first hydroelectric power stations was built on the Waitaki River, which separates Canterbury from Otago. Construction started in 1928 and was completed in 1934, the period of the Great Depression. The project was a type of ‘make-work’ scheme, and as such there were no machines to dig the site. It was all done by hand, using pick, shovel and wheelbarrow. “More than half-a-million cubic metres of material was excavated manually while steam-powered pumps kept the area dry” (p. 12). With such a massive development, a new temporary Waitaki Village for workers was created near Kurow. Fifteen hundred workers were involved in the project as well as others (around 350) who were unemployed and looking for work. Up to 2000 workers were housed in huts and the rest in canvas tents. [...] Based on what had been achieved, Dr McMillan [the medical officer for a Benevolent Society called the Waitaki Medical Association] presented a report to the New Zealand Labour Party conference in 1934. The system was a template for a New Zealand-wide health service. It was adopted in principle and was published as “A national health service: New Zealand of to-morrow.”