A Treaty based framework for mainstream social work education in Aotearoa New Zealand : educators talk about their practice 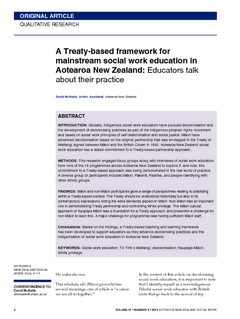 INTRODUCTION: Globally, indigenous social work educators have pursued decolonisation and the development of decolonising practices as part of the indigenous peoples’ rights movement and based on social work principles of self-determination and social justice. Māori have advanced decolonisation based on the original partnership that was envisaged in the Treaty of Waitangi signed between Māori and the British Crown in 1840. Aotearoa New Zealand social work education has a stated commitment to a Treaty-based partnership approach. METHODS: This research engaged focus groups along with interviews of social work educators from nine of the 19 programmes across Aotearoa New Zealand to explore if, and how, this commitment to a Treaty-based approach was being demonstrated in the real world of practice. A diverse group of participants included Māori, Pākehā, Pasifika, and people identifying with other ethnic groups. FINDINGS: Māori and non-Māori participants gave a range of perspectives relating to practising within a Treaty-based context. The Treaty should be understood historically but also in its contemporary expressions noting the extra demands placed on Māori. Non-Māori had an important role in demonstrating Treaty partnership and confronting White privilege. The Māori cultural approach of Kaupapa Ma ̄ori was a foundation for a Treaty approach, and presented a challenge for non-Māori to learn this. A major challenge for programmes was having sufficient Māori staff. CONCLUSIONS: Based on the findings, a Treaty-based teaching and learning framework has been developed to support educators as they advance decolonising practices and the indigenisation of social work education in Aotearoa New Zealand.