From text to audio-visual : how might academics establish a framework for critical analysis using audio-visual essays? 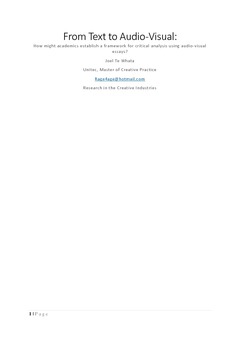 Te Whata, J. (2019). From text to audio-visual : how might academics establish a framework for critical analysis using audio-visual essays? (Unpublished document submitted in partial fulfilment of the requirements for the degree of Master of Creative Practice). Unitec Institute of Technology, Auckland, New Zealand. Retrieved from https://hdl.handle.net/10652/4876