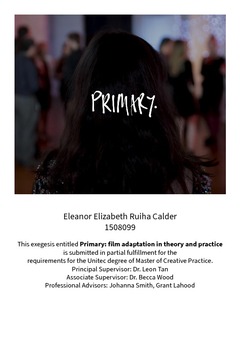 RESEARCH QUESTION: How do all the aspects of the filmmaking process, from scriptwriting to the editing suite, impact the outcome and overall ‘success’ of the adaptation? ABSTRACT: The adaptation of works for film has been around for almost as long as film itself. The main aims of my research were to investigate the adaptation process, specifically through creating a short film from a short story, Primary (2017), and to develop my creative practice as a writer and director. This research was undertaken first by investigating film adaptation and scriptwriting theories, and then applying those ideas practically as I adapted, wrote, directed and edited my short film adaptation. The result is a summary of both film adaptation theories and how these were (and can be) applied in practice with the two main outputs being my script (appendix 2) and my completed short film, Primary. The conclusions drawn from the research include the importance of the differences between film and other storytelling mediums, and how these differences should be leveraged to the advantage of the filmmaker rather than simply trying to faithfully translate a story from one medium to another. Overall, the success of an adaptation rests on maintaining the essence of a story: maintaining the themes, character and spirit of the material more often than not results in a less than perfectly faithful adaptation. These ideas apply not only to adaptation, but to filmmaking and storytelling in general.