The view from nowhere 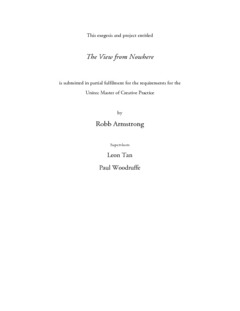 Armstrong, R. (2019). The view from nowhere. (Unpublished document submitted in partial fulfilment of the requirements for the degree of Master of Creative Practice). Unitec Institute of Technology, Auckland, New Zealand. Retrieved from https://hdl.handle.net/10652/4868

RESEARCH QUESTION: How can 3D-modelled and 3D-printed dioramas, sculptures and interactive digital artwork be used to explore my thesis that the Enlightenment/Counter- Enlightenment dialectic forms the core structure of our contemporary episteme? The following document details my project in theoretical and hands-on practice-based research in philosophy, 3D modelling, 3D printing and digital media. First a research question is proposed, encapsulating the project theme and direction. This question regards the application of philosophical discourses around Enlightenment versus Counter-Enlightenment to my material production. An introduction will expand on this question and outline the basic philosophical terrain examined, the reasons for the media chosen, and the programme of research and practice. The subsequent literature review is divided into two sections: situating the project philosophically; and situating the project art-historically. The former examines a number of categories where Enlightenment and Counter-Enlightenment thought clash, including individualism, ideology, epistemology and method, science and technology, nature, religion, history, and universalism. Various positions of different authors are examined in each of these sections. In the second part of the literature review, theories about and works of dioramas are discussed first of all, as these form the core of my project. Works based on a clearly articulated corpus of ideas, such as Surrealism, are then looked at. Most significant in this section is a discussion of Duchamp and why I consider my work to fall into the realm of conceptual art. An analysis of Kosuth and how his works are strongly influenced by philosophy is also presented. An examination of the sculptures of Weiwei and his political vision follows. Finally, the contemporary 3D printed work of Aki Inomata is analysed. An outline of the methodology followed in the project, practice-based research, is then described, along with specific examples of methods used and new knowledge gained. Then a discussion of how my ideas affected the choice of materials and aesthetic decisions, and how these changed along the way, is presented. Finally, an exegesis of three of the key works is given, along with screenshots of the digital version of these artefacts. Exegeses of the remaining works are contained in the appendix.

19 Studies in Creative Arts and Writing