Living with the dead 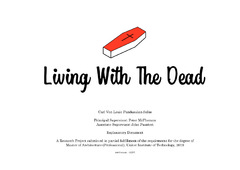 Salas, C. von L. P. (2019). Living with the dead. (Unpublished document submitted in partial fulfilment of the requirements for the degree of Master of Architecture (Professional)). Unitec Institute of Technology, Auckland, New Zealand. Retrieved from https://hdl.handle.net/10652/4856

TRIGGER WARNNG: contains graphic images that some readers may find disturbing. Content not suitable for people under 15 RESEARCH QUESTION: How can architecture facilitate an adequate environment for those living with the dead? PROJECT BACKGROUND: In the inadequately adjusted capital of the Philippines, the poorest citizens have taken to living where nobody else will - close to the dead. Since as early as the 1950s, numerous families have been living in shanty conditions over burial grounds in Manila. In most circumstances, families are unemployed and have no source of income while living in one of the world’s most notoriously overcrowded city. It is well known that Manila is one of the world’s most densely populated urban areas, as migrants from the rural areas have poured in looking for better opportunities. Upon entry, the majority of the migrants discover little work opportunities, along with no place to live, and therefore live in informal settlements. There are portions of these slums that have settled inside open graveyards. Individuals rest in erratic shanties based over graves, or inside tombs. As a free housing settlement, there is no organisation or administration to meet the necessities of these individuals, resulting in completely inadequate living conditions. With no resources such as sanitation, essential electrical supply, clean water, or even adequate shelters, there is no denying that there is an issue that should be addressed. The issue is not only targeted to individuals living in the cemetery but also those living in shanty settlements upon one of the city’s overwhelmed stream ways The Manila government is not appropriately tending to the necessities of the urban less fortunate living in these conditions. The less fortunate can pay as much as four times the typical rate for power and water in their houses. This increase in rates are as a result of the mafia syndicates assuming control and implement the ultimatum to either pay the higher rates or face the risk of not having electricity and lighting or eviction from their existing premises. To generate a scope of the severity of Manila’s housing crisis, about 5.5million of Manila’s inhabitants are subjected to living in informal settlements. Being a Roman Catholic country, it boasts one of Asia’s fastest developing populations but presents a housing shortage. The rapid increase in population implies that the majority of the population must find, fabricate, and cobble together materials in order to have housing in areas that are undesired by most. The areas that people are resorting to are places such as under bridges, nearby expressways, alleyways, perched on floor channels, or for this situation, among the dead upon burial grounds.