In the space : creating a vibrant community through architecture in Levuka, Ovalau Island,Fiji 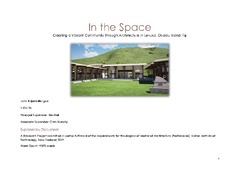 Murgan, J. R. (2019). In the space : creating a vibrant community through architecture in Levuka, Ovalau Island,Fiji. (Unpublished document submitted in partial fulfilment of the requirements for the degree of Master of Architecture (Professional)). Unitec Institute of Technology, Auckland, New Zealand. Retrieved from https://hdl.handle.net/10652/4852

RESEARCH QUESTION: How can the history and cultural identity of the community inform an architectural proposition for a contemporary community and cultural centre in Levuka, Fiji? ABSTRACT Levuka town is located on the Island of Ovalau, Fiji. It possesses a small but culturally diverse population made up of indigenous Fijians, descendants of indentured labourers from India brought by the British in the 19th Century, and settlers from around the world. Levuka was the first capital of Fiji during the colonial period in the late 19th century. This lasted for six years before Suva became Fiji’s capital in 1877. The administration moved from Levuka to Suva in 1882. Levuka town was established by the British and Americans in the early 19th century and the traces of this history are evident in the architectural fabric of the town. In 2013, Levuka was recognised by the United Nations Education and Cultural Organisation (UNESCO) as a World Heritage cultural site and given the title ‘Levuka Historical Port Town.’ Despite its colonial history and the recognition by UNESCO of Levuka as an important cultural site of world heritage, there has been minimal work done to preserve its rich architectural and cultural history. The recent cyclone, Winston, in early 2016 destroyed major heritage buildings leaving the town in an irreparable state and contributing to the decline of its tangible heritage. Moreover, many of the cultural artefacts that used to be housed in a small section of a community building have been taken to Suva for better preservation and safekeeping as the current facility in Levuka has deteriorated. These items range from early Fijian warriors’ weapons such as carved wooden war clubs, spears, and cooking utensils, clay pots, to mention but a few. There were also cannon guns that were used on British ships, soldiers’ uniforms and paintings. The removal of most of these artefacts from Levuka has in some way removed the cultural identity from its original birthplace. Through the review of relevant literature about the history of Fiji , the cultural identity of the multi-ethnicities, and the analysis of several key precedents including cultural and community buildings in the South Pacific and the Oceania Regions, an architectural design process was undertaken which has led to the design of a Community and Cultural Centre which closely responds to the multi-ethnic community in Levuka, Ovalau Island, Fiji. Reclaiming Levuka’s cultural heritage and identity has been realised through this research project with an architectural proposition which responds by fusing the past and present cultural values into a contemporary complex, preserving them where current and future generations can visit and be proud of their history, cultural heritage and identity which was the focus of this architectural research study.