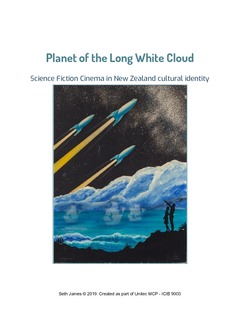 RESEARCH QUESTION: How can the science fiction genre be used to explore cultural identities within New Zealand? ABSTRACT: Stargazing in the wilds of New Zealand is a wondrous thing. The cool, clean air chills your lungs, the only sound is the quiet rustle of trees and lonely birds and the sky. The bedazzled night seems to move with glittering stars, with distant galaxies resting in a milky swirl. Those existential thoughts kick in as you stare: what does the future hold for New Zealand? Will this brilliantly starry night still be here in 10 years? What will it be in 100 years? Will we ever settle on those stars? Future pondering continue: maybe the world will become a cultural hotpot as in The Fifth Element (Besson, 1997). It could equally be a technological dystopia The Matrix (Wachowskis’, 1999). Maybe all the cultures will form their own worlds, each diverse and wonderful, like those in the Star Wars franchise(1977-2019). These worlds linger in the mind, allowing thoughts to wander on how close it is to your own reality and your own world; but how often does science fiction capture the identity New Zealand? The genre has seen global popularity on television and film for decades, with award winning works such as Black Mirror (Brooker, 2011 -2019), Interstellar (Nolan, 2014) or District 9 (Blomkamp, N., 2009) showing just a few examples of the genre’s strength. Following this consideration the focus of the following research is: How can the science fiction film genre be used to explore cultural identities within New Zealand? New Zealand has a range of cultural identities, some old and some new. These cultures possess a range of perspectives and attitudes, over time showing that New Zealand holds no single identity, but an abundance of identity. Often explored and represented in cinema, New Zealand cultural identity is something audiences celebrate, adding these characteristics to our cultural agenda (Petrie & Stuart, 2008). However,is this representation balanced or honest? Exploring New Zealand cultural identities would need to cover many perspectives, which is able to be covered in contemporary media using a webseries. These smaller episodes provide a way for stories to be told in an engaging and entertaining way, while simultaneously contributing to cultural discourse. The research found three key categories in the literature review: the origin and purpose of the science fiction genre; the identifying features of New Zealand cinema; and the history of science fiction cinema in New Zealand.