Tahiti : between myth and reality 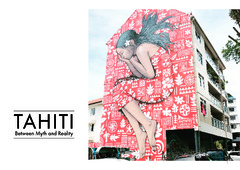 Mou-Sang, S. (2019). Tahiti : between myth and reality. (Unpublished document submitted in partial fulfilment of the requirements for the degree of Master of Architecture (Professional)). Unitec Institute of Technology, Auckland, New Zealand. Retrieved from https://hdl.handle.net/10652/4816

RESEARCH QUESTION: How can architecture represent the colonial past of Tahiti? ABSTRACT: Located in the heart of the Pacific Ocean, Tahiti is one of the 118 islands that make up French Polynesia. It was first “discovered” by British explored Samuel Wallis in 1767, followed by Louis Antoine Bougainville in 1768 and by James Cook in 1769. All of them were charmed by the natural landscape and the beauty of the local people. However, like many other colonised islands in the Pacific, the first contact with Europeans was a turning point for Tahitian society. Tahitians were nearly decimated by diseases, guns, alcohol and aspirations brought by Europeans. The introduction of money and the gospel changed the traditional culture, which revolved around nature and Polynesian deities, and eventually led to the end of the Tahitian Monarchy and the annexation of Tahiti by France in 1880. Tahiti’s tourist appeal is legendary, as Tahiti has held a special place in the Western Imagination since its discovery. But this romantic image, boosted by the tourism industry, distracts from the social and environmental destruction caused by France’s 30-year nuclear testing program in French Polynesia. With the closure of the Centre d’Experimentation du Pacifique (CEP) in 1996, the local government is now looking to tourism for salvation. This project investigates the origins of the first settlements in the Pacific and the means Polynesians used to cross the ocean. A chronological study of Tahiti’s colonial history follows, from the first encounter with the Europeans to the Nuclear Era in the 1960s. The colonial past is analysed, along with the colonial discourse, to see how the European vision of the Pacific has shaped and reshaped the geography of Tahiti over time. The research led to a design proposal of a memorial museum commemorating the colonial past of Tahiti with an emphasis on the nuclear testing in French Polynesia. The project aims to initiate social, economic, and political changes that will benefit Tahitian society and help it recover from the ills of colonisation.