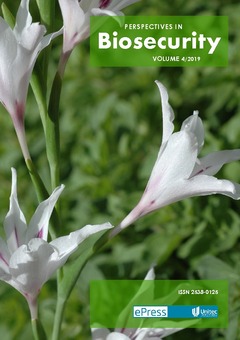 INTRODUCTION: On June 4, 2019, during a visit by two of the authors to Gills Scenic Reserve, Albany, an unusual bramble (Figure 1) was observed emerging from a vegetated roadside bank on Gills Road (-36.722828, 174.696011). The bramble was noted growing amongst a dense tangle of pink jasmine (Jasminum polyanthum Franch.), blackberry (Rubus ulmifolius Schott) and Chinese privet (Ligustrum sinense Lour.). Although no flowering or fruiting material was observed a specimen was collected (P.J. de Lange 14393 & D.J. Blanchon, UNITEC 10706) (Herbarium acronyms follow Thiers [2008-onward]), and that specimen was run through the Rubus key in Webb, Sykes and Garnock-Jones (1988). Of the species recorded by Webb et al. (1988), the closest match for the Gills Road Rubus was Japanese wineberry (R. phoenicolasius Maxim.), a species which has superficially similar reddish bristly stems and leaflets whose abaxial surfaces are whitish. However, the Gills Road Rubus stem bristles were not glandular; while the leaves of the specimen were 3(-5)-foliolate (rather than 3-foliolate), distinctly coriaceous, (rather than chartaceous); adaxially dark green (rather than yellow-green to lime-green); glabrescent, and deeply rugose. Further, the leaflets of the Gills Road Rubus had truncate to obcordate, rather than acute to acuminate, apices and the leaf margins differed from R. phoenicolasius in being more finely and evenly serrulate.