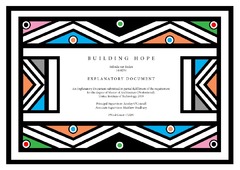 van Eeden, B. (2019). Building hope. (Unpublished document submitted in partial fulfilment of the requirements for the degree of Master of Architecture (Professional)). Unitec Institute of Technology, Auckland, New Zealand. Retrieved from https://hdl.handle.net/10652/4800

RESEARCH QUESTION: How can an architectural intervention mediate the adverse effects of political conflicts in South Africa? ABSTRACT: South Africa, a culturally rich country, has encountered much political conflict which has had an impact on the country’s vernacular architecture. Through the duration of the Apartheid, the political regime caused many indigenous people to be removed from urban areas, resulting in a loss of traditional culture in major cities and led to unregulated settlements on the outskirts. The Post-Apartheid era shows the incline of poverty and decline of education, medical, and housing facilities for directly affected settlements, due to a series of politically driven conflicts. The question considered was; how can an architectural intervention mediate the adverse effects of political conflicts in South Africa? It is through a collaboration of technology, with the local culture that the architectural interventions can speak the language of the context. It shows positive progression towards the future, as the architecture reflects the context of the area and the site. This project “Building Hope” investigated a South African township and proposed a community centre that created opportunities that provided hope for the future and reflected the local culture through architectural design. Most importantly, the design was not a re-invention of traditional architecture, but rather an adaptation of traditional building techniques into modern architecture. It was essential to address the local municipalities current challenges, understand the township’s history and vernacular, as well as finding architectural ways to appreciate their cultural beliefs. The project was broken up into different considerations; political, historical, climatic, cultural, and poverty. These considerations, along with the surrounding contextual elements, impacted the community centre’s design. Architectural ideologies and theories were the underlying drivers for each design decision throughout the development stages of the project. Architectural theorists, and philosophers, such as Paul Ricoeur, Kenneth Frampton, have evaluated how to revive tradition while moving forward with modernity. Kenneth Frampton explains ‘Critical Regionalism’ in his 1983 essay, “Towards a New Architecture, Six Points for an Architecture of Resistance,”1 as a movement that draws characteristic from the surrounding environment in order for architecture to complement its surroundings. This brought up an ideology that many historians claimed have previously moulded South African communities, called “Ubuntu.”2 Ubuntu is not an architectural concept but rather the personality of an area based on public attitudes. The concept motivated the project to become a positive intervention in an area that has experienced great negativity. The design intent of the community centre was to provide opportunities for work, to enable well-rounded education possibilities and also to provide spaces that supported social activities. Before completion of the project, the construction phase of the centre allowed the township residents to become involved in the creation of something that benefits themselves and those around them. The understanding of these factors aided in an outcome that successfully intertwines the old and new. It informed all the design and architectural values that influenced design decisions. The project is a small-scale project that attempted to achieve big change within in a South African township. As an architecture student that grew up in South Africa currently living in New Zealand, my intentions for the project were based purely on the want for positive progression in a society that hits close to home.