Tiareti, A. A.; Mahmood, Babar 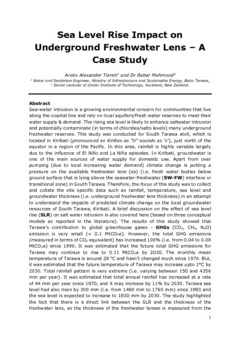 Sea-water intrusion is a growing environmental concern for communities that live along the coastal line and rely on local aquifers/fresh water reserves to meet their water supply & demand. The rising sea level is likely to enhance saltwater intrusion and potentially contaminate (in terms of chlorides/salts levels) many underground freshwater reserves. This study was conducted for South Tarawa atoll, which is located in Kiribati (pronounced as Kiribas as “ti” sounds as ‘s’), just north of the equator in a region of the Pacific. In this area, rainfall is highly variable largely due to the influence of El Niño and La Niña episodes. In Kiribati, groundwater is one of the main sources of water supply for domestic use. Apart from over pumping (due to local increasing water demand) climate change is putting a pressure on the available freshwater lens (es) (i.e. fresh water bodies below ground surface that is lying above the seawater-freshwater (SW-FW) interface or transitional zone) in South Tarawa. Therefore, the focus of this study was to collect and collate the site specific data such as rainfall, temperature, sea level and groundwater thickness (i.e. underground freshwater lens thickness) in an attempt to understand the impacts of predicted climate change on the local groundwater resources of South Tarawa, Kiribati. A brief discussion on the effect of sea level rise (SLR) on salt water intrusion is also covered here (based on three conceptual models as reported in the literature). The results of this study showed that Tarawa’s contribution to global greenhouse gases - GHGs (CO2, CH4, N2O) emission is very small (< 0.1 MtCO2e). However, the total GHG emissions (measured in terms of CO2 equivalent) has increased 100% (i.e. from 0.04 to 0.08 MtCO2e) since 1990. It was estimated that the future total GHG emissions for Tarawa may continue to rise to 0.11 MtCO2e by 2030. The monthly mean temperature of Tarawa is around 28 0C and hasn’t changed much since 1970. But, it was estimated that the future temperature of Tarawa may increase upto 1°C by 2030. Total rainfall pattern is very extreme (i.e. varying between 150 and 4356 mm per year). It was estimated that total annual rainfall has increased at a rate of 44 mm per year since 1970, and it may increase by 11% by 2030. Tarawa sea level had also risen by 300 mm (i.e. from 1460 mm to 1760 mm) since 1993 and the sea level is expected to increase to 1830 mm by 2030. The study highlighted the fact that there is a direct link between the SLR and the thickness of the freshwater lens, as the thickness of the freshwater lenses is measured from the groundwater table to the mid-point of transitional zone (i.e. an interface between SW-FW). If all these climatic and non-climatic factors continue to rise, then groundwater resources in Tarawa may not be sufficient and reliable (due to seawater intrusion) to be used by the people of Tarawa, and also there is a possibility that this Island may disappear in future.