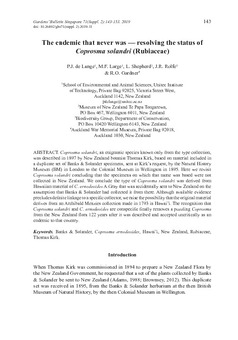 Coprosma solandri, an enigmatic species known only from the type collection, was described in 1897 by New Zealand botanist Thomas Kirk, based on material included in a duplicate set of Banks & Solander specimens, sent at Kirk’s request, by the Natural History Museum (BM) in London to the Colonial Museum in Wellington in 1895. Here we revisit Coprosma solandri concluding that the specimens on which that name was based were not collected in New Zealand. We conclude the type of Coprosma solandri was derived from Hawaiian material of C. ernodeoides A.Gray that was accidentally sent to New Zealand on the assumption that Banks & Solander had collected it from there. Although available evidence precludes definite linkage to a specific collector, we raise the possibility that the original material derives from an Archibald Menzies collection made in 1793 in Hawai’i. The recognition that Coprosma solandri and C. ernodeoides are conspecific finally removes a puzzling Coprosma from the New Zealand flora 122 years after it was described and accepted uncritically as an endemic to that country.