“New Zealand is still learning to get along with itself”: tertiary students discuss New Zealand multiculturalism. 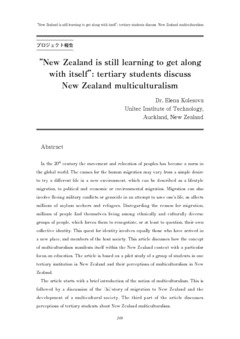 Kolesova, E. (2018). “New Zealand is still learning to get along with itself”: tertiary students discuss New Zealand multiculturalism. Aoyama Journal of International Studies (プロジェクト報告), No 6, pp.209-222.

In the 20th century the movement and relocation of peoples has become a norm in the global world. The causes for human migration may vary from a simple desire to try a different life in a new environment, which can be described as a lifestyle migration, to political and economic or environmental migration. Migration can also involve fleeing military conflicts or genocide in an attempt to save one’s life, as affects millions of asylum seekers and refugees. Disregarding the reason for migration, millions of people find themselves living among ethnically and culturally diverse groups of people, which forces them to renegotiate, or at least to question their own collective identity. This quest for identity involves equally those who have arrived in a new place and members of the host society. This article discusses how the concept of multiculturalism manifests itself within the New Zealand context with a particular focus on education. The article is based on a pilot study of a group of students in one tertiary institution in New Zealand and their perceptions of multiculturalism in New Zealand. The article starts with a brief introduction of the notion of multiculturalism. This is followed by a discussion of the (hi)story of migration to New Zealand and the development of a multicultural society. The third part of the article discusses perceptions of tertiary students about New Zealand multiculturalism.