Predation and risk behaviors of free-roaming owned cats in Auckland, New Zealand via the use of animal-borne cameras 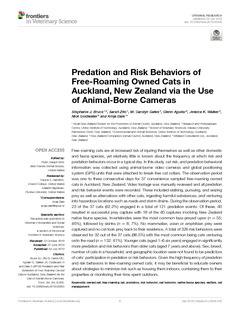 Free-roaming cats are at increased risk of injuring themselves as well as other domestic and fauna species, yet relatively little is known about the frequency at which risk and predation behaviors occur in a typical day. In this study, cat risk, and predation behavioral information was collected using animal-borne video cameras and global positioning system (GPS) units that were attached to break-free cat collars. The observation period was one to three consecutive days for 37 convenience sampled free-roaming owned cats in Auckland, New Zealand. Video footage was manually reviewed and all predation and risk behavior events were recorded. These included stalking, pursuing, and seizing prey as well as altercations with other cats, ingesting harmful substances, and venturing into hazardous locations such as roads and storm drains. During the observation period, 23 of the 37 cats (62.2%) engaged in a total of 121 predation events. Of these, 40 resulted in successful prey capture with 18 of the 40 captures involving New Zealand native fauna species. Invertebrates were the most common taxa preyed upon (n = 55; 46%), followed by skinks (n = 8; 7%). No mammalian, avian or amphibian prey were captured and no cat took prey back to their residence. A total of 326 risk behaviors were observed for 32 out of the 37 cats (86.5%) with the most common being cats venturing onto the road (n = 132; 41%). Younger cats (aged 1–6 six years) engaged in significantly more predation and risk behaviors than older cats (aged 7 years and above). Sex, breed, number of cats in a household, and geographic location were not found to be predictors of cats’ participation in predation or risk behaviors. Given the high frequency of predation and risk behaviors in free-roaming owned cats, it may be beneficial to educate owners about strategies to minimize risk such as housing them indoors, containing them to their properties or monitoring their time spent outdoors.