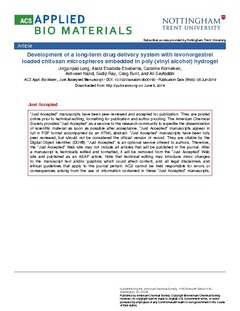 This study reports on the fabrication of a controlled release system for the delivery of levonorgestrel (LNG) for long-term contraception. LNG was encapsulated in chemically cross-linked chitosan (CS) microspheres, and microspheres presented a spherical geometry with a good particle size distribution (polydispersity index (PDI) < 0.1). The LNG-CS microspheres were classified based on their particle size range, <63, 63–125, and 125–300 μm, where the 125–300 μm particles were selected to be incorporated into a physically cross-linked and annealed PVA hydrogel matrix to prolong the drug release. PVA concentrations and the annealing treatment influenced the swelling behavior of PVA hydrogels. Fourier transform infrared (FTIR) spectroscopy indicated that CS was successfully cross-linked through the formation of a Schiff base; the PVA hydrogel was formed through hydrogen bonding without reacting with LNG, which was only physically entrapped, thus maintaining its stability. Differential scanning calorimetry (DSC) showed that freeze–thaw and annealing processes increased the degree of crystallinity in the PVA hydrogel. In vitro drug release assessments for all formulations showed zero order without any burst release. Over a period of 100 days, 34, 27, and 21% of LNG was released from the CS-LNG microspheres in the size ranges < 63, 63–125, and 125–300 μm, respectively, while only 14, 11, and 9% of LNG was released when the CS-LNG microspheres were incorporated into 10, 15, and 20% PVA hydrogels, respectively. The drug release kinetics exhibited both diffusion- and swelling-controlled mechanisms following the Korsmeyer–Peppas model. This work presents a promising delivery system for long-term contraception with controlled zero-order release behavior [ROMS = 64350] Nand, A. V. = Unitec author