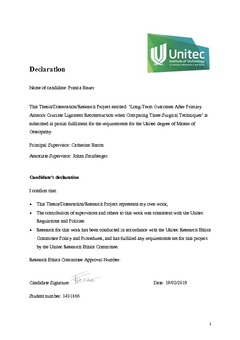 BACKGROUND: Anterior cruciate ligament (ACL) reconstruction is one of the most frequent orthopaedic surgeries in young, active people. Secondary graft rupture is common and there is insufficient long-term evidence supporting the application of different surgical techniques to reduce its risk. OBJECTIVE: To investigate and compare outcomes of three primary ACL hamstring graft reconstruction surgeries. METHODS: Retrospective analysis of primary ACL reconstructions undertaken by one surgeon between 2006 and 2012 using three techniques of different graft placements and anchors were compared: (1) Single bundle graft at the site of the antero-medial bundle (SB), (2) a double-bundle graft with proximal and distal endobutton fixation, (EB), and (3) a double-bundle graft attached in a continuous loop with minimal fixation (MF). The primary measure was ACL graft rupture post-operatively. Secondary outcomes included recurrent rotatory instability, return to sport incidence and time-frame, and patient reported outcome measures (PROMs). RESULTS: A total of 216 participants were included (51, 77 and 88 in SB, EB and MF, respectively), 145 (67.1%) male, and aged 30.38 ± 11.63 (mean ± SD). Patient gender between the three groups was significantly different: 37 (72.5%) for SB, 58 (75.3%) for EB and 50 (56.8%) for MF (p = 0.026). There were 151 (69.9%) cases of concomitant injuries (meniscal or chondral), with meniscal injuries making up 65.7% of these injuries. The rates of meniscal injuries were significantly different between the three surgical groups (72.5%, 67.5% and 53.4% for SB, EB and MF, respectively (p = 0.046). Graft failure occurred in 17 (7.9%) surgeries and did not differ statistically between the three surgical groups (p = 0.284) at 8.4 years (SD ± 2.2) follow-up. At a follow up of 9 years (IQR = 7 – 10), 79.3% of participants felt stable with pivoting movements, with no significant difference between groups (p = 0.353). Levels of pre- and post-injury activity were not significantly different between groups when using Marx and Tegner scores (p=0.055, p=0.481), with 56.6% of all participants returning to their previous level of sport at median time of 26.00 (IQR = 12.00-42.50) weeks. CONCLUSION: There were no differences in ACL graft rupture rates or patient-perceived stability after more than 8 years follow-up between three primary ACL reconstruction hamstring graft techniques.